This month has been a bit of a busy one so I feel like i've not had as much time to try out new recipes. I've still managed to eat fairly healthy and when i've treated myself or eaten out, i've made up for it by eating well the next day. I'm really starting to find a balance with everything. The same goes for working out, i've probably worked out less this month but i've walked so much and not stressed out about missing a workout like I used to. 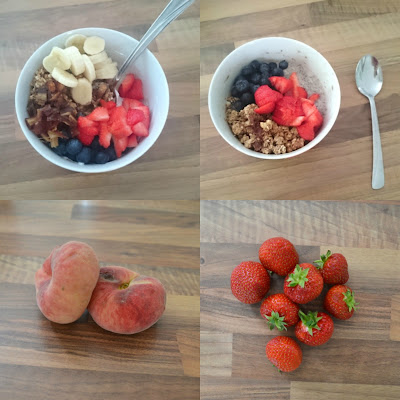 BREAKFAST:
As it's getting warmer i've been having oatmeal less and preferring homemade granola with greek yoghurt and fruit or a chia pudding with similar toppings. The one i've been making is this banana chia pudding which is really good and something that I make the night before and is a great quick breakfast. One of my favourite things about this time of year is that so much fruit is back in season. I've been loving strawberries for breakfast and snacking on donut peaches which taste so amazing. 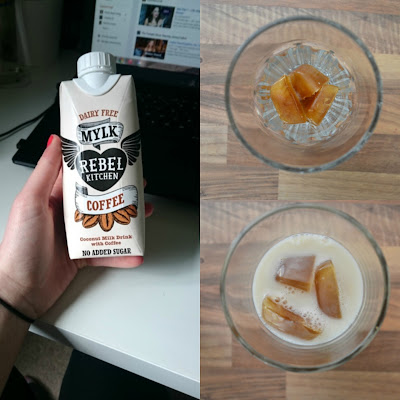 ICED COFFEE:
I'm a self confessed coffee addict. I've been trying to cut down and have done really well this year. Something I love in the Summer though is iced coffee. I learnt a bit of a hack this month in which I brew some coffee, add any sweetener I want then freeze them in an ice cube tray. When frozen I add 5-6 cubes into a glass on top up with almond milk. As the ice melts you get this really cold, super tasty, iced coffee. I went to Whole Foods whilst I was in London recently and picked up this Rebel Kitchen Mylk Coffee which was so good. They put the 4 ingredients so i'm going to try re-create it at home. 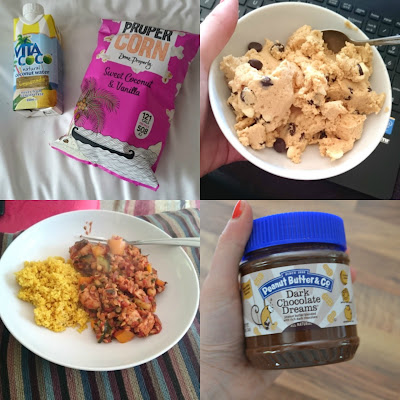 SWEET TREATS:
Whilst in London we went to the cinema and I took my own healthy snacks. I tried the Vita Coco Lemonade Coconut Water which was really good and one to try if you're normally not a fan of coconut water. For the snack I had the ProperCorn Sweet Coconut & Vanilla Popcorn which I definitely want to try and re-create. Another London purchase was the Peanut Butter Company Dark Chocolate Dreams peanut butter which is pretty amazing. I've had it on banana, medjool dates and just on it's own. My favourite treat has been healthy cookie dough which I will be doing a recipe on soon as it is so good and fairly guilt free.

MEALS:
I've been still making a lot of salads for lunch and making more one pan meals in the evening which I can make in bulk and freeze a few portions. If you struggle to eat healthy I would definitely recommend doing this and it saves so much time. A go to for me is some vegetables, chopped tomatoes, spices and either beans or lentils in a pan and it tastes great and is easy to do.


I haven't found any new cookbooks recently and have been using Pinterest a lot more to find some things to try out. If you have any cookbook recommendations I would love to hear them. What have been some of your health favourites this month?
Posted by Unknown at 09:00